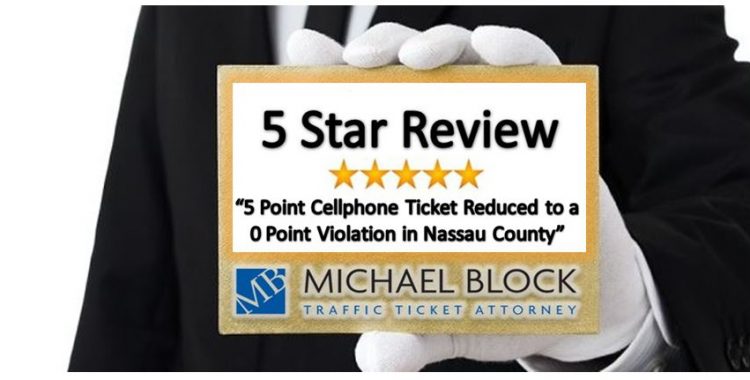 A 5 point Cellphone Ticket (Operating Motor Vehicle While Operating a Mobile Phone) In Nassau County Traffic Violations Agency was reduced to a 0 Point Jaywalking Violation.  Our client was driving Westbound on Southern State Parkway and was pulled over right on exit 19!

This is nothing new.  Cellphone Tickets in Long Island and New York have skyrocketed in recent years!  From 2011 to 2012 tickets issued for driving while texting increased 234 percent.  Under Governor Cuomo, the state pledged $1 million to fund the campaign against cellphone use as well as increased the 3-point penalty to a 5-point penalty on the driver’s record.

The cost of cellphone tickets can range between $50 to $400 depending on the gravity and frequency of the offense.  Aside from the immediate cost of the ticket, points on your license could cause insurance premiums to increase significantly.

When you receive the cellphone ticket, do not discuss it with the police officer.   Anything you say can, and WILL be used against you in court.  Officers take notes on any comments you make which can later harm you while disputing your traffic ticket.

A cellphone ticket lawyer is waiting to help you. New York Traffic Ticket Law can be very damaging to your driving record. My advice is: don’t pay that traffic ticket. Take a moment now to share a few details about your ticket here.

We always fight for the most favorable outcome and are always glad to have great results for our clients. If you’ve received a speeding ticket or any other type of moving violation, let us help you! Email us at michaelblocklawyer.com or call (212) 227-9008 to learn how we can defend you.

We fight tickets all over New York, including: Queens, Manhattan, Brooklyn, Bronx, and Long Island.